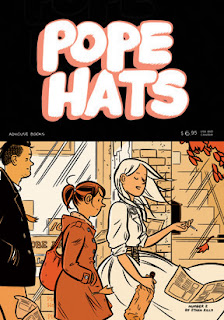 Just when I thought I lost my faith in alternative comics, along comes Pope Hats #2. While the first instalment by Ethan Rilly was just nice, the new book blew me away.

According to Adhouse Books advertisement issue one satisfies the typical need of an indie comic book reader as it presents an „engaging slice-of-life story about young people navigating their own daily shortcomings.“ The young person in question is in the case of Pope Hats Frances Scarland who works her ass off as a law clerk and lives together with her roommate Vickie, a second rate theater actress, in some unknown city in America. 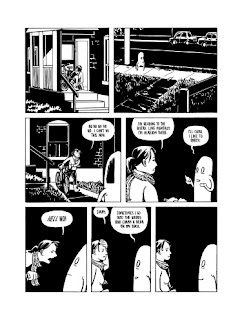 The slacker story is depicted in the reduced black and white style of indie comics in order to focus more on life`s tragedy instead of the colorful clothes the women are wearing. You get all the philosophical dialogue, induced by alcohol, the questions about the meaning of life, the prospects but also the fears of having an actual adult life. On top of that Rilly offers a slightly surreal ghost friend for Frances.

It may have won a Xeric Foundation Grant in 2008, yet, the story is quite predictable. When I finished it, I was pleased, but the feeling of having already read such a comic a thousand times still lingered.

I have nearly cancelled all by subscriptions down at the comic store – Sorry, guys I miss you too – but as Indie comics come out only once a year I saw no need to actually cancel Pope Hats from my list. So when I found the time for some shop talk, they handed me my bag of comics and in it I found the second issue. I wondered for a second: Would buying this put me in the same endless limbo Vickie and Frances are in? I tried to decide whether to purchase it or not. Turning it around in my hands the friendly back-cover gave me a hint: 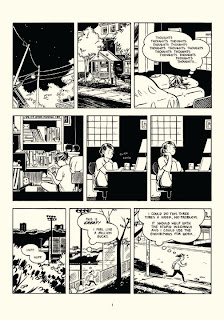 It also told me this the higher price of 6,95 US-Dollars is okay, because of the special jumbo-size with added material, which I come to later. Let me tell you why Pope Hats #2 gave me back my faith in Indie comics.

Turning the first page I found exactly what I was looking for. Rilly creates a vivid setting in the most literary sense – as only Kevin Huizenga does in Glenn Ganges. You see our hero Frances lying in bed struck by insomnia, as we will get told by her in inner monologue two pages later.

But Rilly does not come right to the point, he circumdraws the situation in the very first two panels: In the first you get a lamppost at night and the second zooms in on the entrance of a house. The third panel portrays the protagonist lying in bed. Even before we see that her face is turned away from us, we get her thoughts. The thought balloon above her head is filled with, what else, „thoughts, thoughts, thoughts“. The conclusion follows in the next line of panels. Frances gets up en tries to pass some time. This is the prelude to an adult angst portrayed on the pages to come. 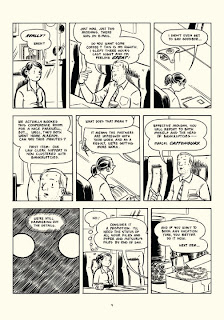 Even the contrasts in the second issue are sharper. The contours of Frances and Vickie are somewhat crisper than in the first issue, which was somehow under the influence of the girl’s wild drinking binges and ghostly manifestations. Here, Rilly captures life through a more sober lens.
Rilly’s cutting edge style begins to actually slice the so-called slice-of-life-genre. For the first time the comic really grasps the fear that build up in all those indie comics, and shows its gruesome reality. While the first issue was a sobbing and staggering around into some kind of growing up, the second installment actually presents a Frances who has to act in a world dominated by work, bills and responsibility. She is stuck in her cubicle and in the everyday dynamics of her law firm: Her hours are raised but the pay stays the same, he boss increases her workload, and she has to participate in senseless dinner-meetings.
Yet the slacker attitude is kept up by her roommate, who still indulges into into drinking and dreaming. The promise that the youthful life will never end is harshly contrasted by reality. Rilly’s Pope Hats #2 portrays the next step in adult life, so many comics try to evade. I have to admit that it was an impulse-purchase, but I have not regretted it later and I hope to see more of Rilly’s work in the future.


PS: I nearly forgot about the three additional short comics in the back. They are great. We get the life of a smoke puff, a flashback of Frances‘ youth showing her father who practices laughs for his office job, and a brilliantly timed bus ride. The commuter’s story on his own is worth the 6,95 US-Dollars as the guy, in „Gould Speaks“ is one of these memorable monologue you so often have with yourself, when life seems absurd or beautiful or both at the same time.