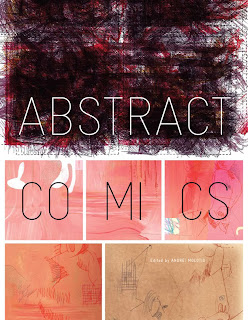 Much has been said and written about Andrei Molotiu’s new Anthology Abstract Comics. Although the critical voices arrive at different conclusions about the work, one statement remains unchallenged: Abstract Comics challenges our general perception of comics as an artform. We are tossed into a collection of abstract pictures devoid of any form of conventional narration, yet the cover and the panels confirm that we are looking at comics. Whether this is true or not, it still questions our general understanding of comics. Do they need a plot or even a consistent narration?
In Germany Abstract Comics has the possibility to strike a chord in a discussion about comics, which is overwhelmed by an amorphous debate about the Graphic Novel. Being the country of Dichters und Denkers these debate are always guided by Eisner’s remark about a certain quality of the story told. You can imagine how scholars, booksellers, readers, and publishers argue which comic to promote with the privileged status of a Graphic Novel and which not. Molotiu’s collection might give the option to question these debates. As there are no narrations present, how do we judge these „comics“ and are they really comics? Even if the verdict is against abstract comics, the reflection itself might shed a new light on other comics, too.

The most interesting observations about Abstract Comics is certainly the concentration on the panels themselves. While narrative comics focus on the gutter between the panels, the reader is scanning the abstract panels for some kind of resemblance, in an fruitless effort to make sense of it all.

Molotui’s cosmos of abstract comics is constantly evolving on his blog.

For the review of Abstract Comics in German be sure to look here:
„Gib mir ein Zeichen“